This is the Alpha Version of Planet Crafter. The game is in active development and should be released during the first quarter of 2022.

For now, it's still a prototype, but we are looking for players to give us feedback!

You are sent on an hostile planet with one mission: make it habitable for Humans. Gather minerals and resources to survive. Craft all the tools you'll need in order to fulfill your mission. Explore old crashed ships and ruins and discover a planet full of mystery.

Build you own base

You'll need a base and all sorts of machines to make yourself at home, and be able to bring life on this planet!

View on Steam and Wishlist!

This is such a promising start and for an early alpha there's a lot of content here!! I think I did everything I could but I definitely feel like there were more areas I could have explored! This one is definitely getting wishlisted!!

Ok so i love this game and it has so much potential but there are some very annoying things that i hope get fixed in the full version and they are! I can't walk into my living pod because the walking is so not good the slightest ramp can completely stop you if you don't get the placement right and its just so annoying. The next one is i don't know how to find water are we supposed to forage for it or just keep on passing out and losing all your exploration progress. Thats all ive really found annoying so far so please fix these but overall its a great game

Thank you for the feedback! We are aware that the walking is not perfect, we will work on that. To craft water, you need to use a Crafting Station that you need to build in your pod :)

Cool game, really like the concept, looking forward to seeing it more done.

are you using unreal to make games?

We are using Unity :)

Is this an indie game?

its not made by some AAA company so yes, it is.

Yes, it's completly indie as we are only two people working on it :)

This game, is just, awesome.

The hard work you put into this is great, still has a bit of bugs, but this is an alpha after all...

I would like to see more of this great work...

Q : Is the game going to be free when released?

Thank you! Feel free to subscribe to our newsletter if you want to stay up to date with the project! The alpha & beta version will be free, but the full game won't.

Sure, I will check the newsletter, and I will be waiting for the full game :D

Wauw, this game was quite the fun!

First off, this game reminds me so much of Subnautica, from which I suspect you have taken just a little bit of inspiration ;)

I really like the idea, I never really though a game of this genre and type would work so well on Mars! Now, of course this is not yet perfect, but as stated, it is an Alpha Version, and I can not wait to see the progress over the next year!

How come you only have a year to further develop this though? This has some much potential, you should really keep it up even after that, perhaps even propose this idea to the creators of Subnautica and see if you could be involved in commercial project with this concept! It could be called Astronautica or Cosmonautica haha.

Jokes aside, you would have nothing to lose by trying this, and I really think there might just be a chance that this would work. Develop this game as you whish over the next year, and you will have a great proof of concept and even blueprint for when presenting it, if you actually choose to take this path.

Now, back to the concrete game. The music was nice, but a bit repetitive as of now. The gameplay was simple, but fun! The graphics are good for an early alpha, and I am surprised how many assets the game already contain. The resources models could use a little tweaking. The Sizes make them seem almost "cartoony" so to speak. And of course some of the attest do not yet have a function.

I did give it a while, but did not see any actual change in the environment with the terraforming, I assume this feature is not yet in the game, is that correct? I would really like to see that implemented! :D

I know this is just an early version, but in the full release I would like to see more incentive to build a base, other than just doing it for fun. I know I have to stop with the Subnautica comparison, but when playing that game, I never got to really build a cool and fleshed out base, as it was not really required to complete the game.

So to conclude, this game was great for an Alpha, and I do not doubt that it will be even better ones the future updates release! I will be looking forward to this! 5/5 star from me, from what I have seen so far! Keep up the good work!

And if you would like me too, I would gladly upload your trailer to my channel too! not that I have a lot of subscribers, but it would be free advertisement. If so, I will of course refer it directly to your channel and/or whatever else media you want it to refer to, by adding it in the description and by adding an edit to the beginning of the vidio. You could also yourself edit a trailer that channels could upload, so that any connections you want made is done exactly how you like them. Anyway, it is up to you, but I would gladly have this awesome trailer for this awesome game on my channel!

Thank you for the let's play and the comment! :)

The game is indeed inspired by subnautica, among other games. The terraforming is not yet implemented, you saw everything the alpha had to offer :D

Dont bother updating the trailer, but feel free to upload another let's play when the beta or full version will be available :)

Lot's of good ideas & comments in there, I'll keep track of it!

Do you plan to implement wild life too? :)

And what other games did you draw inspiration from? I would like to see if I could recognize some of the features from these games.

For now, there is no plan on implementing wild life. If the game is well receive on launch, maybe I'll add this kind of features.

Other inspirations are games like "Planet Base", "The forest", The long Dark", or the board game "Terraforming Mars". 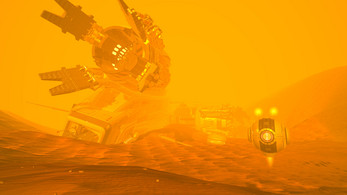 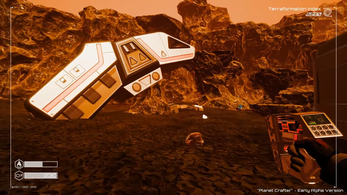 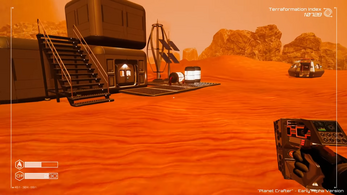